A girls getaway that honors the past and welcomes the future, in St. Charles, MO 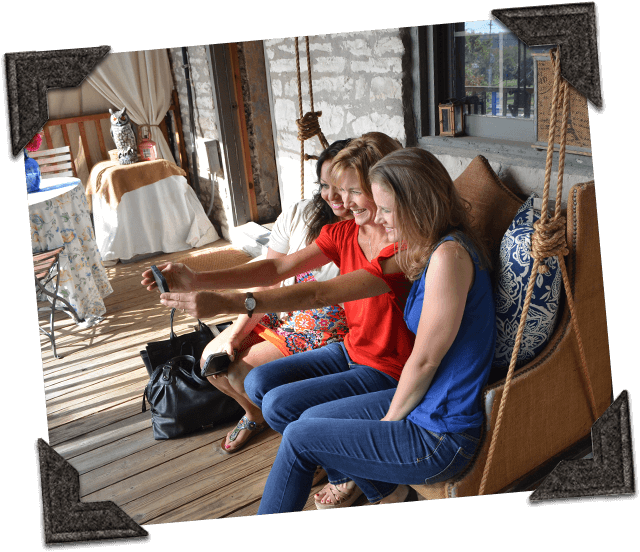 “Let’s do some shopping and find something that will look good on us in this decade!” 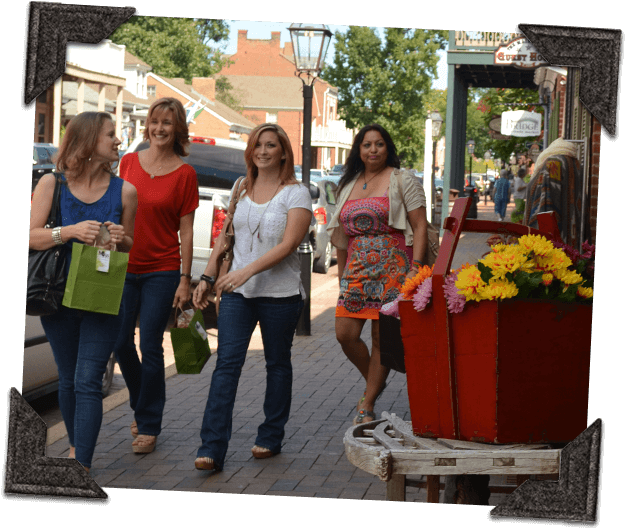 “We have to celebrate,” I told my best friend, Anna, over the phone. There were major changes happening in our little circle of friends. Anna had gotten engaged a couple of weeks before. I had recently landed what was basically my dream job. Our friend Holly was turning 30 and Sara had just moved back to town after being away at grad school for two years.

I had actually been thinking of drinks and dinner, but hey—this sounded even better. “You know, that actually sounds great. Let’s do it! Where do you want to go?”

“How about St. Charles? It’s so close, and there are wineries and some great shopping.”

The excitement in Anna’s voice was contagious. “Done,” I said. “Weekend after next?”

Two weeks later we were pulling into St. Charles, giddy with excitement over our celebratory weekend. “Do you guys remember this?” Anna held up an old photo album she’d brought. It was opened to a picture of the four of us on a beach trip we had taken many years ago after college graduation. The clothes and hairstyles were a bit dated, but the smiles on our faces looked exactly the same as the ones we were wearing right then—pure joy and delight at spending time with some of our favorite people in the world.

“Oh, those jeans! They’re awful,” Holly said, burying her face in her hands. “What were we thinking?”

“We were thinking we looked amazing,” Sara said with an embarrassed grin. “Now let’s do some shopping and find something that will look good on us in this decade!”

I was thrilled to spend more time discovering the broader shopping scene. 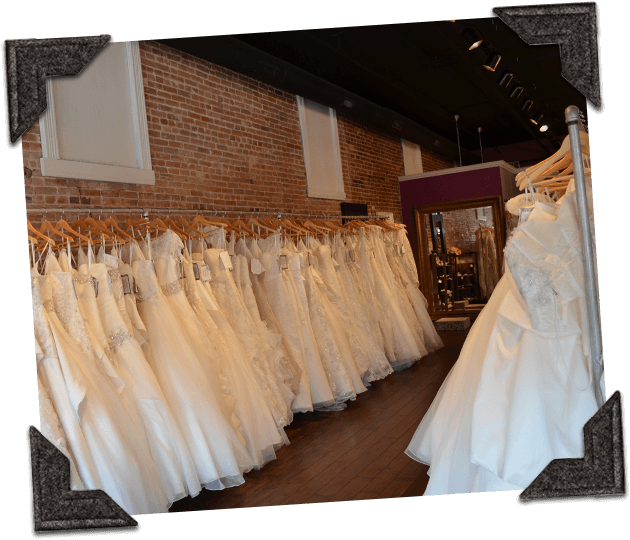 “Kind of nice to be able to buy what we want and not ask our moms for money.” 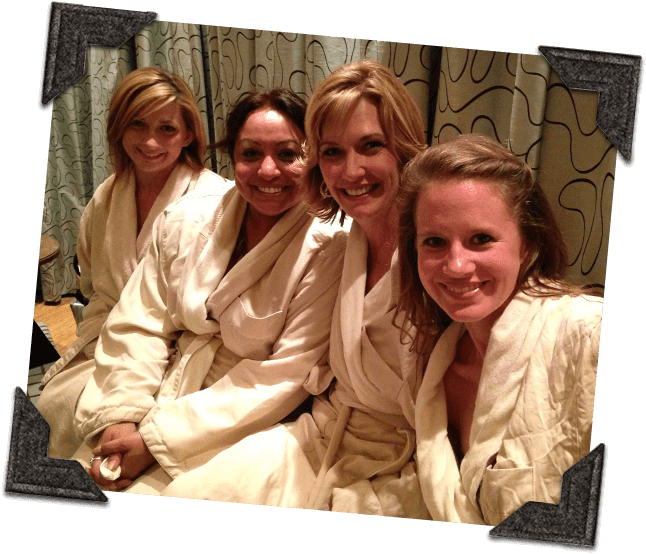 The only time I’d ever been to St. Charles was to experience the ambiance in December, when Main Street is transformed into a magical Dickens holiday dreamland. So, I was thrilled to spend more time discovering the broader shopping scene. The bridal boutiques were a must for Anna, who was eager to start getting ideas for her wedding dress. We ventured into Frenchtown, where Anna found plenty of inspiration at Wedding Gallery and White Traditions Bridal House. I spent the better part of an hour getting lost in Main Street Books while Holly and Sara, both antique lovers, were in heaven at stores such as Fox and Hound Antiques, Bayard Street Antiques and Centuries Past Antiques. Together we browsed through clothes shops—Holly found a gorgeous bag at MOss Boutique, and April’s on Main had beautiful home decor. Then, I got my new favorite pair of earrings from Ooh La La, Inc!

I had flashbacks to the afternoons the four of us spent at the mall after school, making wish lists of all the things we would buy if we could afford it. Holly voiced my exact thoughts—“Kind of nice to be able to buy what we want and not ask our moms for money.”—as she admired the gorgeous Victorian vase she purchased. I looked up at her and smiled.

We decided we needed a little pampering, so we headed to Mantra Salon & Spa to get pedicures for our tired feet. There was a bridal party getting treatments while we were there, which made Anna inquire about special packages. “We may just be spending another weekend here soon, ladies,” she said, smiling, and gave a dreamy sigh. That would be absolutely fine with me, I thought.

“We may just be spending another weekend here soon, ladies,” she said… That would be absolutely fine with me, I thought. 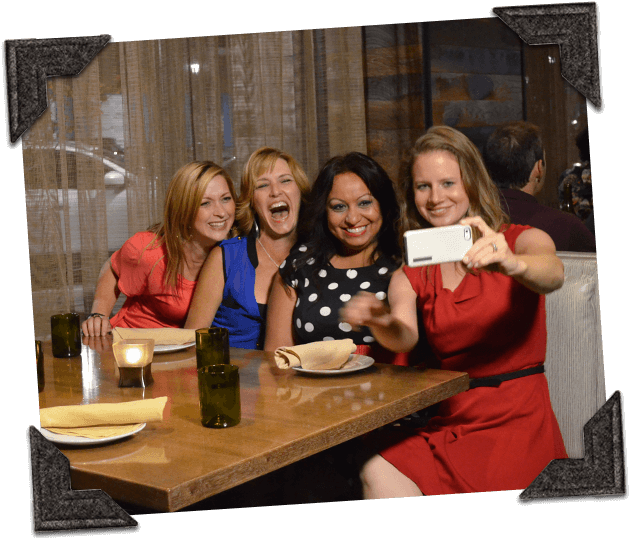 The Boone's Lick Trail Inn … has been in St. Charles for more than 150 years, standing witness to the area's settlers and visitors. Now we would be adding our stories to theirs. 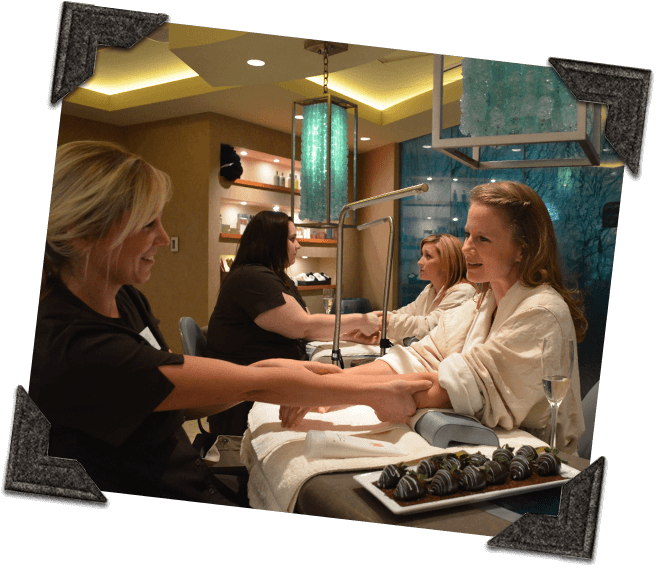 Nightlife and calling it a night

The Streets of St. Charles area is filled with great nightlife and dining options. Wanting to wear some of our cute purchases, we went a little more upscale at Prasino, where the cocktails and sushi are to die for. And there was no way we were passing up the almond gooey butter cake for dessert.

After reminiscing over high school and college days and making a toast to the new and exciting adventures happening in each of our lives, we decided to call it a night and head back to our rooms at the Boone’s Lick Trail Inn on Main Street. This luxury historic inn has been in St. Charles for more than 150 years, standing witness to the area’s settlers and visitors. Now we would be adding our stories to theirs.

Breakfast the next morning was served up by the inn’s hostess, V’Anne Mydler. Her cheese-stuffed French toast with strawberry sauce is reason enough to stay the night. It was the perfect way to start day two of our girl’s weekend. And after the first day of hitting the shopping scene, we all agreed some rest and relaxation was in order. So, we booked a luxury spa experience at the Ara Spa at Ameristar. Their aroma fusion massage and seasonal signature facial were exactly what the morning called for.

That afternoon we kept the peaceful, easy feelings flowing with a nice, relaxing bottle of wine. St. Charles has a number of amazing wineries, but the menu at Little Hills Winery and Restaurant was too tempting to pass up. We shared a brie cheese bread boule and I had a chicken ambrosia sandwich that was delicious. I was also fascinated by the fact that the wine is bottled in caverns running right underneath 4th Street and dating to the 1850s. On limited occasions they will even open up the caverns for a small tour. We weren’t able to see them this time around, but we’re already thinking about next time. And, of course, we each bought a bottle of wine to take home. (I got the Alpenglow Blanc!)

Ara Spa at Ameristar. Their aroma fusion massage and seasonal signature facial were exactly what the morning called for. 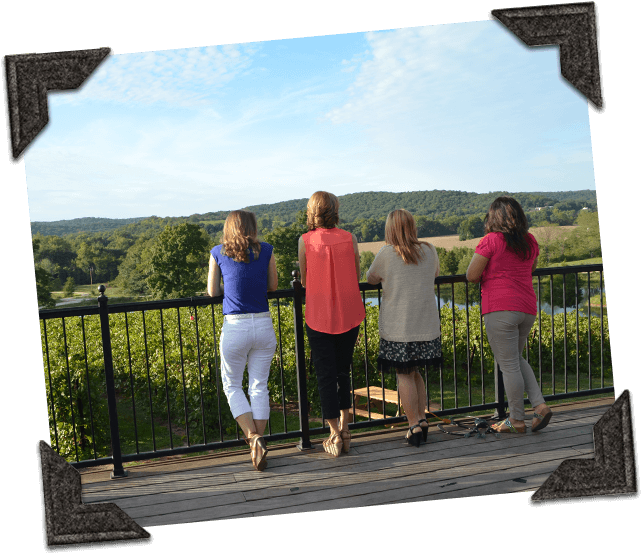 That evening, we strolled through the Missouri River village under the glow of antique gaslights. “Would you mind taking our picture?” Anna asked a gentleman who was passing by. We thanked him after he snapped the shot and looked over Anna’s shoulder at the photo on her phone. Later she pulled out the old beach picture and held them beside each other. “To add to the collection of great memories,” she said. We all nodded in agreement.